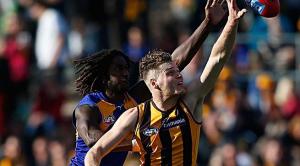 Lowden was selected in the 2008 draft at pick 63, but unlike fellow Sandringham Dragons players drafted that year such as Jack Watts, Taylor Hunt, Ty Vickery and Tom Lynch, he had to wait over five and a half years before making his first AFL appearance, as Kate Smart reports.

His debut AFL game against West Coast was more than serviceable – three goals straight, 15 hitouts plus 12 disposals. – taking on the likes of Nic Naitanui and Dean Cox. But a dream debut, Lowden has made way this week for the return of David Hale, and will instead make his way to Box Hill City Oval Saturday to help the Box Hill Hawks against Williamstown.

Everyone’s football journey is different, and while his fellow 2008 draftees have notched up double figure AFL game appearances, Lowden has been steadily building on an apprenticeship with Box Hill, where he’s played 60 matches and was part of the 2013 Premiership team.

Lowden’s close to six year journey to the AFL is a reflection of his hard work and perseverance, with many people having helped him along the way. Lowden ironically made his AFL debut under Hawthorn caretaker coach Brendon Bolton, the same coach he began his career with Hawthorn’s VFL affiliate Box Hill. This symmetry of events had not been lost on Bolton, who is just two weeks into the role of senior coach.

“It’s been two different pathways but one that I’m very proud of, particularly on Luke’s behalf.”

Bolton recognised Lowden’s resilience, acknowledging his AFL debut was “a great reward for effort and perseverance.”

Drawing on their strong list, Hawthorn has been able to patiently nurture their young talent. Lowden may have been waiting in the wings since 2009 but the athletic ruckman has had time to develop his craft and add extra strings to his bow.

For Box Hill Hawks coach Marco Bello - who will regain the ruckman’s services this week for the crucial top four game against Williamstown - Lowden has been learning what he calls the “ruck capper” in his progression from young draftee to leader around the club, and was pleased he made the most of this first AFL opportunity.

“He was a young raw kid when he first came in and he finally (he) got his opportunity at the highest level. He deserved it as he’s worked really hard for it.”

Through the experience he has been gaining at Box Hill, Lowden is developing into a more versatile player, moving forward and nabbing some goals.

It is this versatility that Carroll believes helped Lowden in Tasmania, where he hoped the exciting young ruckman would “back himself to get his hands on the ball and influence the game”, which he did with three goals on debut.

They say patience is a virtue and Luke Lowden, along with Box Hill and Hawthorn are beginning to reap the rewards, as this talented young ruckman was able to last week take his first step in AFL. It may have taken him nearly six years to get the call up but all agree there are few who have shown more resilience and are more deserving.