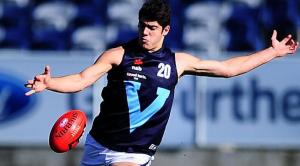 Vic Metro has ensured the 2014 NAB AFL U18 Championships will go down to the wire, inflicting SA's first defeat with a 14-point win.

After a 44-point defeat in Round 3 against Vic Country, Metro saw the return of some key players - namely Peter Wright - to help them to their second victory of the Championships. Wright dominated the ruck with 29 hitouts (VM winning hitouts 36/27), had 16 disposals, 10 marks and finished with three goals to be among the best for Metro. He was joined in the best by Ed Langdon with four goals (13 disposals), D Vlojo-Rainbow (21d, 8mk, 6 rebound 50), Ed Vickers Willis (16d), Corey Ellis (13d), Jason Castagna (13d), Christian Petracca (26d, 7 clearances) and Angus Brayshaw (25d, 6 I50).

While SA kicked the first goal of the game, Metro answered with the three unanswered goals to finish the first quarter, with the sides' eventual top three scorers - Langdon, Brendon Payne and Wright - all getting on the board early to hold a 14-point quarter time lead.

Vic Metro extended its margin to 20 points early in the second term as Payne added his second. Defense was the key for Metro, not enabling their opponents to kick back to back goals during the second term, as they answered each of SA's goals with one of their own to hold a 16-point lead at half time.

The third term mirrored the first, as SA once again kicked the early goal, only to have Metro reply with two goals to Langdon and Angus Brayshaw with his first to give Metro a handy 26-point buffer heading into the final quarter.

Payne kicked his third to open the final quarter, and Metro looked home with a 32-point lead. Wright joined Payne on three goals to cap off a dominant game in the ruck and up forward, and despite SA kicking three of the last four goals of the game, Metro were home with a comfortable 14-point win.

Vic Metro will return to Geelong for its last two Championship games at Simonds Stadium:

Division One - Round Four continues Sunday: