How Vic Country can still win the U18 title 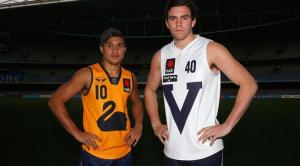 Vic Country is still alive in the NAB AFL U18 Championship, despite suffering a 63-point defeat to its bogey side South Australia in Round 5 last week.

Country has been unable to overcome SA their last nine encounters, but might still get the ultimate revenge by taking out the Championship title.

Firstly, Country needs to win its final round game against WA at Etihad Stadium at 5pm. In Round 4 of the Championships, Country dominated to produce a 62-point win in Western Australia. A four goal to nil first term set up the win, with Jack Lonie (4 goals / 24 disposals), Nathan Dixon (28 disposals) and Darcy Tucker (22) the key players for the game for Country.

Secondly, Country needs its Metro cousins to help out by defeating SA on Thursday at Simonds Stadium, as a SA win on Thursday will mean they automatically claim back to back titles.

In a strange twist, the Championship result could go down to the final score of the Vic Metro versus SA game, as a Metro win does not automatically give them or Vic Country the title. If Vic Metro defeats SA, then three teams will be locked on four wins and two defeats, and the Championship will be decided by percentage between SA, Vic Metro and Vic Country.

Despite Country trailing SA by 26% and Metro by 20%, if these two teams fought out a close contest on Thursday, and Country has a 10goal win against WA, the percentage gap will quickly be erased.

But as mentioned, Country’s first focus is defeating WA. They will hope to benefit from Pat McCartin having another game under his belt, with two goals on return from injury for Vic Country last week, and will also have the addition of tall Rowan Marshall who had 14 hitouts combining with Gach Nyuon in the ruck against SA.

The picture for Vic Country – and Metro and SA – will be much clearer later tonight. After six rounds though, it might be a rushed behind, out of bounds on the full or a late goal that helps decide who will win the 2014 NAB AFL U18 Championship title. This can only add to the excitement of seeing the best U18 talent from around Australia take to the field.

Both games will be broadcast on Fox Footy, and keep up to date with scores via twitter via @TACCup.