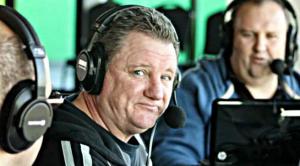 It started seven years ago as a couple of blokes talking about sport, and has evolved into an integral part of TAC Cup coverage.

TAC Cup Radio broadcasters Rick Morris and Phil Crooks love their footy and all things sport, so much so, they host their own sports show on local community radio station Plenty Valley FM.

Back in 2005 they had an association with the then coach of the Northern Knights, Neil Connell, who has since gone on to work in Player Welfare for the North Melbourne Football Club.

Morris and Crooks would regularly chat to Connell on their radio show about the progress of the Knights through the season. It was these weekly chats that sparked Rick and Phil’s interest in the TAC Cup and eventually led them to calling a Northern Knights game.

As Crooks recalled, their first ever TAC Cup game for broadcast on Plenty Valley FM was in 2008 between the Northern Knights and Murray Bushrangers at Preston City Oval.

"Little were we to know at the time what we had stumbled upon. It all started from there."

With Plenty Valley FM calling local football, the opportunity to call more TAC Cup games just wasn’t there. But fortunately the advent of digital technology that enabled online broadcasting through apps and websites meant that all was not lost.

Working with AFL Victoria and BPM Media, Morris and Crooks have been able to broadcast a game each week with listeners all over the world tuning in through the TAC Cup website and the Red Time Sports app.

The rise of the audio sharing website Soundcloud has also allowed interviews and match calls to be loaded on to the site for posterity.

Morris and Crooks pride themselves on their TAC Cup knowledge, and their calls reflect not only their understanding of football, but their knowledge of the players, the clubs and the competition in general. Mixed with their quirkiness and humour it makes for entertaining listening.

"We get some really kind feedback from the listeners," Crooks said.

"We are pretty active on social media through Facebook and Twitter and we get a great response through there.

The TAC Cup clubs understand the value of having their games broadcast and have embraced TAC Cup Radio.

"The clubs have made it really easy for us just to come in and do our thing, we are made so welcome where ever we go," Crooks said.

Digital technology allows them to broadcast from practically anywhere with a wifi signal.

"We’ve been to Gippsland, Bendigo and North Ballarat a couple of times. People bend over backwards to help us and make us feel welcome, not only just to do the call but at the after match functions and things like that."

Footy purists, Morris and Crooks marvel at the standard of football constantly displayed by the TAC Cup teams.

When asked what he liked about watching TAC cup games Morris replied "The one on one duels are fantastic. You don’t get as many rolling mauls as what you do in the AFL, but it’s still tough around the packs, they go hard at the ball."

"I don’t know whether it’s a pressure thing from the crowd in the AFL or whether the TAC Cup boys just practice more in their spare time, but I really notice that the kicking for goals is really good at TAC Cup level."

Morris and Crooks are strong advocates for having players staying forward of centre, a rule which the TAC Cup is trialling in 2014 and see it as making TAC Cup football an even more attractive brand of football to watch.

"I absolutely love it, I think it’s made for such a difference in the way the game is played," Crooks said.

"What I really notice is that if you can get a break away in the middle of the ground and you look up it’s a two on two inside 50. When they kick it long you get that contest that we all love, a key forward verses a key defender."

Over the years Morris and Crooks have followed the development of a number of TAC Cup players who have gone on to become household names in the AFL.

Watching so many TAC Cup games so closely, both have a keen eye for talent. For Morris it’s the players that move more like footballers rather than athletes that stand out.

"You can see the kids that have real football talent. They are not just athletes, they have got the football smarts and the skills and they are clean with their hands," Morris said.

"Josh Saunders really stood out to me. I thought he looked like a real footballer when he came on the scene at TAC Cup level. Lewis Taylor is another one, real running type with good skills, clean hands."

Crooks added "All the experts will tell you that the boys have to be exceptional in some area to get drafted, and that usually stands out at TAC Cup level. Marcus Bontempelli is an example of that, his agility and his time in space stood out.

"If you come and watch the TAC Cup footy you will see it, they shine out a bit."

Crooks describes the pride that he has in the TAC Cup competition and the players that do go on to make a name for themselves.

"I love seeing when the guys go on TV and it says where they came from."

"The clubs are now becoming more well-known now too, you know the likes of Brian Taylor mentioning footy factories at Calder Cannons and Geelong Falcons, the clubs are becoming real entities. It’s great to see the recognition."

Each year there is a number of TAC Cup players that both Morris and Crooks think are good enough to go to that next level that don’t get picked up in the draft.

They admit that their biggest shock, and still continues to be to this day, is that former Northern Knights, now Williamstown VFL player Adam Marcon hasn’t been drafted by an AFL club.

"Adam Marcon is one that I still think is good enough to play AFL footy. He always had a lot of time around congestion and he always got the handball out, he doesn’t panic," Morris said.

Crooks agreed, "He could be dropped into any AFL team and be playing as a good serviceable midfielder. He’s not going to be a superstar but he is going to be one of those real good workers around the midfield in amongst the rotations."

Marcon has continued to improve in the VFL, he recently was awarded player of the match for the VFL in the State representative match against the SANFL.

"We have our fingers crossed for him. He has made a bold move from the Northern Blues across to Williamstown this year to try and open up his chances so we hope it works for him."

Like the many volunteers who put countless hours into the TAC Cup at club level, Morris and Crooks do it all for the love. But for them it doesn’t seem like hard work at all, it’s a lot of fun. They find doing TAC Cup Radio rewarding on so many different levels.

Crooks said it best. "We enjoy what we do and the opportunity to mix with some really good genuine people."

The TAC Cup radio team of Phil "Crooksy" Crooks, Rick "Mongoose" Morris with Gabe Sorrentino and Paige Cardona call all the action from a TAC Cup match each week.

The call can be heard via live streaming on the TAC Cup website:

and also via the Red Time Sports App found in the iTunes store.

Previous match calls and interviews can be heard at: