Rd 1 defeat for Vic Country in U16 Champs 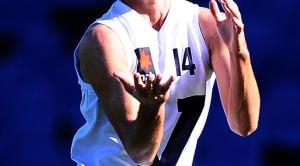 The NAB AFL U16 Championships kicked off tonight at Metricon Stadium on the Gold Coast.

After leading at the first three breaks - by 16 points at the final change - Vic Country were unable to hang on in the final term agaisnt an inaccurate South Australian side who kicked 4.6 to 1.0 to run out eight point winners.

The next game for Vic Country is next Tuesday versus WA.

On Saturday Vic Metro opens its U16 campaign against WA.