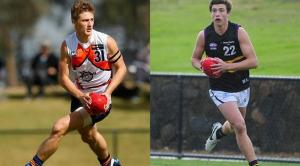 The list of invitees to the 2014 NAB AFL Draft Combine was released this week with 48 out of the 96 players invited coming from the TAC Cup competition.

The combine, which will be held at Etihad Stadium in October, will run over four days and involves a raft of testing along with interviews conducted by the various AFL clubs.

Under the watchful eye of recruiters and coaches players will complete skills testing such as the Nathan Buckley kicking test and the Matthew Lloyd hands test that measure both execution and decision making, along with fitness based tests such as the beep test and 3km time trial.

To be invited to the combine, each player must have won enough votes from interested AFL clubs.

The AFL has left space to upgrade four players if their performances at the end of the season warrant a spot, and will this week organise invitations for state draft combines around the country.