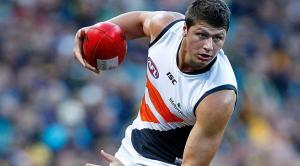 The Greater Western Sydney young gun was recognised for his performance against finals bound Geelong in the first half of Round 18.

The 21-year-old took a career-high nine marks and kicked two goals against the Cats in the first week of the split round as his Giants crept within seven points of an upset victory.

The former Vic Metro star endured two injury interrupted seasons after being selected as the No.1 Draft Pick in 2011.

Despite making his AFL debut in Round 12 2012, he began this season with just 10 games to his name after a knee reconstruction curtailed his early progress.

But Patton has emerged as a future champion of the AFL this year, having managed 21 goals from 16 games to date.

Other highlights in 2014 include three goals in the Giants’ win over the Sydney Swans in Round One and three goals against the Brisbane Lions in Round 13.

While key forwards traditionally take longer to develop, Patton has become one of the Giants’ key men in attack and is currently ranked first amongst players eligible for the rising star in contested marks and fourteenth across the competition.

AFL Victoria High Performance Manager and head of the Vic Metro Academy Anton Grbac said Patton had done well to handle the pressure that comes with being the No.1 draft pick.

"Jon was part of a Championships winning Vic Metro side and was very impressive, basically playing a lone hand up forward," he said.

"It’s really pleasing to see that he has been able to absorb the pressure and expectation of being taken at No.1 and become a quality player at the elite level."

"He is obviously still developing but being able to cope with that expectation shows a great deal of maturity."

"It’s been fantastic to see Jon develop the way he has this season and this nomination is reward for a lot of hard work he has put in coming back from his knee injury," he said.