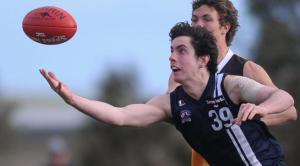 The 18-year-old Brisbane Lions player took 12 marks in the backline in the Lions 23-point win over Melbourne at Etihad Stadium.

Darcy was regarded as one of the best defenders in the TAC Cup last year, named centre half back in the Team of the Year and was taken at pick 22 in the 2013 NAB AFL Draft, after exceling during the season in one-on-one contents with his strong marking and effective spoiling.

Geelong Falcons Talent Manager Michael Turner said early opportunities for Darcy in the Brisbane lineup has helped his development this season in the AFL.

“He has done well in his first year at Brisbane.

“With their list and the young team they have got, he has probably been given an early opportunity which has been good for his development,” Turner said.

“He was obviously one of our key players last year, really aggressive at the football, a fairly quiet kid, but he is a real competitor which he has shown in the AFL games this year.

“He has had some big jobs to do in the backline when Brisbane has been under pressure, but he is a very competitive defender, and as time goes on he will develop into an elite AFL player.”

Darcy made his AFL debut in Round Five and has played 14 games, becoming a consistent part of the Lions defensive line-up and recently extended his contact with the Lions, which will see him remain at the Lions until at least the end of the 2016 season.

Brisbane Lions coach Justin Leppitsch said Darcy had been a consistent performer for the Lions this season.

“Darcy has really established himself as a crucial part of our back line this season,” he said.

“It’s never easy to come in to a side and hold down a key position role, but Darcy has managed to do this consistently for us week in week out.

“He’s got great aggression on the field and it will be exciting for our fans to witness his development over the coming years.”

Darcy played his junior football at Queenscliff and represented St Joseph’s College during his time at the Geelong Falcons.

He was a member of the 2013 Vic Country Under-18 Championships team and was named in the 2013 Under-18 All-Australian team and joins Lions teammate and former Falcon Lewis Taylor as a Rising Star nominee in 2014.