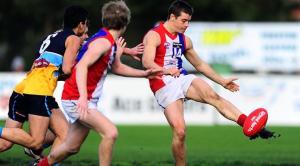 Following on from a review of the talent pathways and changes to the NAB AFL U18 Championships, the NAB AFL Academy program has been revamped.

The original AIS-AFL Academy program started in 1997, offering thirty 12-month scholarships to young footballers to enhance not just their football, but their education and personal development as well.

Planning for the program restructure commenced in 2013 after the Australian Institute of Sport flagged the end of their association with the Academy to allow a greater focus on Olympic sports.

The selected players for both 2014-15 squads will come together for the first time in late September and then early December for camps in Melbourne.

As a part of the new schedule, the level two squad will play a showcase game during AFL Grand Final week against a ‘Rising Star’ team made up of players eligible for the draft from across Australia.

Whereas in the past the level two squad travelled to an AIS training base in Europe around the start of the TAC Cup season, the squad will now travel to the United States in January for a twelve day high performance camp.

This allows the players to experience an international camp, but still be available to play for their TAC Cup clubs from the start of the season.

In a move that’s been embraced by the AFL clubs, level two players will also spend more time experiencing an elite level environment with one week at an AFL club in late November and another week at a different club in early January.

Level two players will then come together for a ten day camp in Melbourne during April that will include matches against VFL teams.

The timing of the level one squad’s trip to New Zealand has also been changed from January to April to coincide with the AFL match in Wellington on ANZAC Day.

The TAC Cup players selected in the level one and two AFL Academy squads are as follows: