From rookie to Rising Star nominee 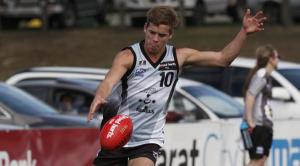 It has been a meteoritic rise for former North Ballarat Rebel Jake Lloyd from the basketball court to AFL arenas over the last five years.

The hard work has paid off for the former junior Vic Country basketballer who was this week named as the Round 21 NAB AFL Rising Star nominee – the 16th former TAC Cup player to receive a nomination this year.

Jake was recruited to the Sydney Swans from the Rebels at pick 16 in the 2012 NAB AFL Rookie Draft. He was upgraded to the Swans senior list in Round 5, making his debut against Fremantle and has played every game (15 matches) since.

The 20-year-old midfielder gathered 21 possessions, 10 marks and seven tackles in the Swans’ win over St Kilda at the SCG on Saturday, earning his this weekend’s nomination..

After deciding to focus solely on football when he joined the Rebels at age 18, his form in his first TAC Cup season was reward with another year at the Rebels as a 19 year old in 2012. He capped off a successful season by winning the TAC Coaches Award, earned a spot in the TAC Cup Team of the Year and was then rookied by AFL premiers Sydney.

North Ballarat Rebels Talent Manager Phil Partington said Jake has done a lot of work over a long period of time to break in to the AFL.

“The one thing that stood out when Jake joined our program was his high work ethic. He is a very clean ball winner and makes the right decisions in close quarters.

“He worked extremely hard to get himself as fit as possible, doing a lot of work away from footy training to help improve his game.”

Jake played two NAB Cup games in 2012 and then played the entire season playing for the Swans in the NEAFL averaging 28 possessions a game.

“He’s always been an elite runner and ball getter and he’s improved the other aspects of his game and he’s gotten to the stage that he’s been able to come into the senior team and play on a really consistent basis," he said.

“He’s able to play a number of different roles for us and it’s a good acknowledgement of his form to date that he’s been able to get a Rising Star nomination.

“He plays up forward, he plays wing, he can play inside and he can play half back and as we have seen he can come off the bench in the sub role and be able to get plenty of the ball as well.

“To be able to have those different strings to your bow like he’s got is very handy because we want players who are flexible and who can play a number of different roles," Longmire said.

Jake played senior football with Horsham Demons in country Victoria from the age of 16 and played in four successive premierships.

Jake is the second former Rebel to be nominated this season, joining former teammate Matt Crouch who was nominated in Round 5.