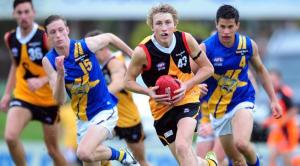 You could say the Western Jets and Dandenong Southern Stingrays Elimination Final is an unlikely matchup, if you were looking at the ladder entering Round 18 of the home and way season.

Both sat inside the top four, and simply needed to win to secure a double chance, and the first shot at ladder leaders Oakleigh and Calder.

It was not to be the case for either side.

With one round to play, the Western Jets looked set for its best finish to a TAC Cup season since way back in 1995. The equation was simple, defeat the 11th placed Gippsland Power and the double chance and third spot was secured.

Someone forgot to mention the plan to the Power, as they reversed a 36-point Round 6 defeat to the Jets. Power kicked seven goals to four in the final term to record a thrilling two point win and knock the Jets out of the top four.

Western now find itself in the all too familiar position that they have in two out of the previous three years of needing to win four matches in a row to claim a maiden TAC Cup premiership.

The Western Jets record against top eight teams this year has not been great, with only three wins from 10 contests. But the news is good entering the match against Dandenong Stingrays this weekend, with the Jets having claimed two of those three wins this year against their Elimination Final opponent.

All bar one of the Stingrays eight losses this year have come against top eight teams, with Murray and Sandringham being the only finalists they have defeated during the home and away rounds.

Entering this game both sides will need to improve their form from the final round if they are to progress to the next stage of the finals.

The winner Sunday will meet the loser of the Calder Cannons versus North Ballarat Rebels match.