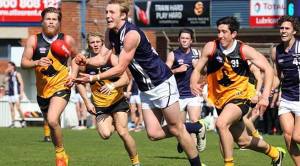 It was two starkly different stories last week that led Geelong Falcons and Dandenong Stingrays to a country clash in this weekend’s TAC Cup Semi Final.

For all but two minutes of the Qualifying Final against Oakleigh Chargers, Geelong Falcons looked likely to be enjoying a week off to prepare for a Preliminary Final for the second year in a row, and a chance to go a step further in the finals than 2013.

Then the Oakleigh Chargers changed the script.

With the final two goals of the game to Ben Crocker and Toby McLean, the Chargers hit the front by a point, and that is where they stayed when the final siren sounded sending the Falcons to a Semi Final match against the Dandenong Stingrays.

The Stingrays jumped out to an early 24-point lead against Western Jets, but were never able shake them all afternoon. Despite leading by 17 point early in the final quarter, it looked as if the Elimination Final clash would play out similar to the Falcons clash the day before, with the underdog all day in the Jets finishing full of run and set to finish over the top of the Stingrays. The margin got as close at three points midway through the last, before Dandenong was able to settle in time on to win through to the Semi Final stage of the TAC Cup finals.

It was only a fortnight ago that these two teams met in the final round of the home and away season, with Geelong securing its double chance with a convincing 59-point win over Dandenong. Geelong led from start to finish, finishing with 12 individual goal kickers which will need to be an area that the Stingrays target this weekend.

One player that they will not have to match on Sunday is Pat McCartin, who will be a costly omission for the Falcons; sidelined through injury. He has only played five games for the Falcons this year, but with 20 goals has been their second leading goal kicker behind Christensen, and kicked three against the Stingrays in their last encounter. Darcy Parish will be another watching from the sidelines for the Falcons.

The Stingrays had a number of players down on form last week, but will be hoping they can reverse the results against Geelong that has seen them lose their last four encounters against the Falcons, with their last win in Round 17, 2012.