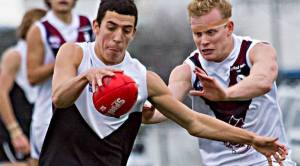 North Ballarat Rebels and Sandringham Dragons will meet in this weekend’s TAC Cup Semi Final, after only percentage separated them at the end of the home and away season.

When North Ballarat defeated Oakleigh in the final round, Sandringham needed a big win against the Eastern Ranges to enter the top four at the expense of the Rebels. While they completed the win, it was not by enough, falling 6% short of the double chance.

The Rebels will now be making the most of their double chance, after early signs last week pointed towards them causing an upset and heading straight to a Preliminary Final match. A four goal first term by Jesse Palmer helped the Rebels to an early lead over the Calder Cannons by 29 points, before their opponents registered their first major in the Qualifying Final.

But despite the Rebels 21-point lead at quarter time, the game would soon be turned on its head as the Cannons took control of the game. The ladder leaders kicked 23.7 after quarter time to the Rebels 3.7 to eventually run out winners by 99 points.

Sandringham Dragons were eventually able to get over the line against the Murray Bushrangers in a tight contest. Despite leading all afternoon, and jumping out to a 29-point three quarter time lead, the Bushrangers never gave in, closing to within nine points in the final term. A tight defensive effort in the dying stages helped the Dragons into the Semi Finals.

We need to head back to midseason in Round 9 for the last time these two sides met, with both teams experiencing different form lines. The Rebels were at the midpoint of an eight game winning streak, while the Dragons were completely opposite, two games into an eventual four game losing streak.

Oscar McDonald was the standout for the Rebels back in Round 9, and he was again among the best for North Ballarat last weekend in a key defensive role. Jesse Palmer finished with six goals last weekend, taking his season tally to 34, but he will need more support up forward after his 16 disposals and eight marks were not enough to keep the Rebels in the contest against the Cannons.

While Harry Dear and Alex Spencer were the leading targets for the Dragons earlier in the season, it will be a smaller more mobile forward structure that the Rebels need to contend with this weekend, with both talls on the sidelines due to injury. In recent weeks captain Angus Brayshaw has been the leading goal kicker for the Dragons, and he will be an important match up, along with a number of other small forward/mids like Tom Wilkinson and Nic Pavlou that will be the key to the Dragons kicking a winning total.

LAST TIME THEY MET
Round 9

CLICK HERE for a preview of the other Semi Final: Geelong Falcons v Dandenong Stingrays