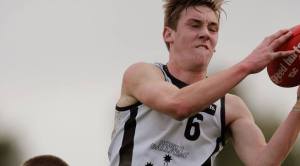 North Ballarat Rebels swingman Oscar McDonald’s stunning second half of the year has finished with the TAC Cup Coaches Award.

McDonald, the younger brother of Melbourne FC defender Tom McDonald, was awarded votes in seven of the final eleven rounds, illustrating both his talent and consistency.

Despite being overlooked for Vic Country selection in the NAB AFL U18 Championships, the boy from Edenhope as rocketed into draft calculations.

With an ability to haul in contested marks and mix it with the best forwards in the competitions, McDonald could prove the perfect option for AFL clubs looking for a robust defender.

But at 196cm, he has also proved a handful for opposition backman, with the ability to win the ball on ground level as well as in the air.

Rebels coach David Loader said his young star had long been a familiar face at the club.

“Before that time Oscar was also a regular sight at the Rebels when he would come to watch his older brother Tom (Melbourne FC) go through the program.”

“Oscar played seven games of TAC Cup football in 2013 and showed some promise as a developing tall forward/backline player.”

“During 2013, he was successful in juggling his studies and football workload and from this he gained a 99 ATAR score.”

Loader said McDonald had come on leaps and bounds this season.

“In 2014 Oscar has channelled all his energy into his football while working a Teacher’s Aide at St Patricks College during his gap year and has played in ever Rebels match this season.

“For a key position player he has very high endurance which can see him play at both ends of the ground.”

Loader said McDonald had received tremendous support from his family who make the long trip from Edenhope each weekend to follow their children's sporting endeavours.