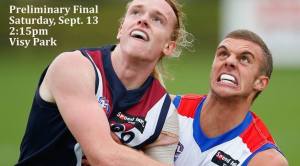 Rewind 12 months and the 2014 Preliminary Final combination of Oakleigh Chargers and Sandringham Dragons were both interested onlookers for the 2013 finals; finishing in ninth and tenth on the ladder.

Both will this weekend be aiming to return to TAC Cup Grand Final day as they continue their fierce rivalry in the competition.

The sides have met on two occasions this year, with Oakleigh triumphing both times in Round 7 by 78-points and Round 10 by five points.

Chargers coach Mick Stinear knows that it will be a different Dragons side they face in the Preliminary Final this weekend.

“Looking at Sandy’s team there are a lot of players that did not play that day, so it is almost like two different sides.

“Last time we played them Spencer and Dear were a handful for us, but watching them last week, Clayton kicking three in the last quarter, and the ability of Brayshaw to push forward and Balic looks like a quality footballer, it will be a good challenge for our guys.”

With a number of players able to play at either end of the ground, the Chargers unpredictability makes it hard for the opposition matchups, but also provides options for the coaching staff if things are not going their way during the match.

“We are fortunate with the quality we have got and players’ versatility,” Stinear said.

“Even players like Crocker can play at both ends of the ground. Along with Beasley and Moore it gives us a couple of options depending on how the game goes and matchups for us.”

Choices will need to be made at selection, with one 19 year old player to miss out, and a question mark on whether Jordan De Goey will be ready for Saturday.

Sandringham Dragons Coach Justin Plapp would dearly love to have injured talls Alex Spencer and Harry Dear at his disposal this weekend, but a number of younger players have stepped up in their absence and could be the weapons they need to make a Grand Final.

“There have been a few bottom age players that have stepped up in that (forward) area that we did not think would be as advanced as what they were.

“Young Jordy Matera has stepped up over the last couple of weeks and won a bit of the footy, and Harley Balic is another one at the start of the year we did not think would get much of a hitout, so they have really stood up and given us a bit more flexibility.”

After a great start and finish in last week’s Semi Final game, Plapp knows his side needs to eliminate the mid game lapses to win through to a Grand Final.

“We had some lapses (last week), as at this age group it is at times hard to keep the guys focused.

“We certainly finished the game off well, and coming into a Preliminary Final, I told my guys they are nearly harder to win than Grand Finals are – the pressure is going to be on, and we give ourselves a great opportunity to finish the year off well.”