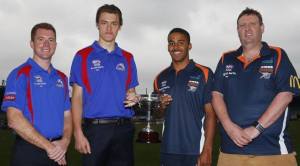 The two standout teams in the TAC Cup competition meet this weekend, with Calder Cannons and Oakleigh Chargers going head to head in the season finale.

It is the first time since 2010 that the top two teams from the home and away season meet in a Grand Final.

Over recent years the number one position on the TAC Cup ladder has been a poisoned chalice, with Calder Cannons (2011), North Ballarat Rebels (2012) and Geelong Falcons (2013) all not making it to the Grand Final.

But 2014 is different, with the TAC Cup finale ticking all the right boxes featuring the top two teams on the ladder at season’s end, two likely top 10 draft picks playing (Peter Wright and Darcy Moore) and of course the competition leading goal kicker (Jayden Foster) who is closing in on 50 goals for the season.

The Calder Cannons were chasing Oakleigh all season on the ladder, only claiming top spot in the final round to set up their finals campaign.

Calder went antagonisingly close to a Grand Final berth last year, but was cut off by Dandenong Stingrays. This year they were able to overcome the Stingrays in another Preliminary Final, to have their shot at a seventh TAC Cup title.

After claiming the TAC Cup title in 2012 –the clubs second premiership win – Oakleigh missed the finals in 2013. This year saw them as the dominant side all season, only toppled for top spot on the ladder in the final round of the season – by their finals opponent Calder – after they dropped back to back matches to finish the year.

Both teams had no trouble accounting for their Preliminary Finals opponents, with Calder 53-point winners over Dandenong and Oakleigh accounting for Sandringham by 64.

Despite the big win for Calder, the main concern was the sight of key tall Peter Wright heading to the bench in the final term, bringing into question his spot in the Grand Final.

Calder coach Andrew Jago was quick to state that Wright would be taking his spot in the Grand Final.

“We are confident he will play – we have spoken to the medical staff about it. He did a recovery Sunday, we had him assessed and he is good to go.”

With a full quota to select from, both coaches have some tough decisions to make regarding the final sides that will take to the field. While there a number of players in contention, coaches don’t like to upset a winning line-up.

“Bruno Laguda, Tanner Nilsson and Aaron Christensen are all keeping those in the squad very honest, and Ben Allan will also certainly come under consideration for this week,” Jago said of the Cannons.

Oakleigh Chargers coach Michael Stinear has similar selection dilemmas, with season regulars having missed during the finals so far.

“Dan Houston, a bottom ager, missed last week due to a small injury, but he trained well last week and unlucky to miss out.

“Alf Oppy has played nearly all games and missed out last week, as well as Cunningham and Phillips two bottom agers that have been emergencies,” Stinear said.

“We are pretty lucky with our list management. There are probably only four to five guys that are not available out of a group of 66 that have played for us all year. It will be tough at selection, but coming off that win we will not be making too many changes.”

In their Round 15 meeting earlier in the year, the sides looked remotely different than they will for the Grand Final clash, with Calder victorious by 38-points.

“Calder just got a hold of us and did enough to win, but you cannot look too much into it as Calder had four to six players out, maybe even more.

“They are two different sides now, so we have to do our homework a bit more as we have not had a chance to play our two full strength teams,” Stinear said.

The battle in the middle of the ground will be tantalising. During the finals Mark Kovacevic and Marc Pittonet have both taken their ruck work to another level, and the players and coaches are looking forward to the match up.

“I think we match up really well across the ground, and that is one (contest) we are looking forward to,” Stinear said.

“Knowing Pitts, he certainly loves a challenge, so that is one he has been looking forward to for a little while, and has now got himself into some really good form to be able to ruck against the best.”

Jago pointed out the two rucks have plenty of history, vying for the Vic Metro ruck spot against each other.

“Kova is looking forward to the challenge, and has great respect (for Pittonet). They were both in Metro consideration and probably one replaced the other during the Championships.”

Up forward, Calder has been damaging during the finals, kicking 40 goals in the two games played. In an ominous sign for the Oakleigh defence, all six Cannons’ forwards registered a goal last weekend against Dandenong, as it turned into a raffle each time the side went forward who they would kick to.

From the key forwards in Peter Wright, Cal Moore and Jayden Foster, to the dash of small forwards Josh Cauchi, Hisham Kerbatieh and Damien Cavka, the numerous options will be difficult to contain.

The match will showcase the great talent present in the TAC Cup competition, with a close game likely between these two top teams.