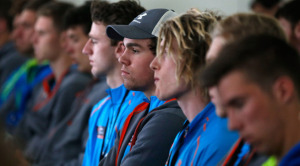 The 2014 NAB AFL Draft Combine kicked off today at Etihad Stadium with just over half of the 101 participants from TAC Cup clubs.

Players were welcomed to the 21st edition of the combine by AFL National & International Talent Manager Kevin Sheehan, who highlighted the recent Brownlow Medal winner Matthew Priddis as a great example in persistence for potential draftees.

“For three years in a row he was churning out 15+ beep tests, he had pick me written all over him,” Sheehan said to the group.

“He didn’t say much, he just kept producing the results and eventually he got the opportunity that he so badly wanted.

“So the dream can be there for you if you back it up and give your best effort.”

Sheehan asked the players to give it their best shot, but to also enjoy and embrace the experience.

“Whenever you have down time, have some fun and be yourself.”

His closing statement to the group setting the scene for the week ahead,

“Whatever happens, have a great time and let’s really enjoy the next four days.”

It’s not just the player’s skills and fitness that will be put to the test at the combine.

Divided into positional groups, each player has been given a detailed time table, and its each individual’s responsibility to make sure that they are in the right place at the right time. All the while, just how the players adapt to this new environment and interact within their group is being closely observed by the AFL clubs.

With the psychometric testing getting underway this afternoon, it didn’t take long for new friendships to be forged as former allies on the field supported each other. The nerves were put aside and the determination and competitiveness came to the fore.

The tone for the remainder of the combine has been set as players strive to make their AFL dreams come true.