Marshall all smiles at Combine 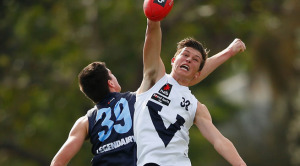 The first thing you notice about Rowan Marshall is his beaming smile, you rarely see him without it, writes Kate Mitchell

As the NAB AFL Draft Combine got underway today, Marshall was typically all smiles. And why wouldn’t he be?

The North Ballarat Rebels Draft hopeful never expected his football journey to go this far, and here he finds himself among the 100 best young prospects in the country.

After a tough 2013 season where he struggled to string together games for the Rebels, the ruckman’s dramatic form shift saw him become a regular contributor not just for the Rebels, but also Vic Country in the 2014 NAB U18 National Championships.

Marshall attributes his change in fortunes to the decision to move from his home town of Portland to the Rebels’ base in Ballarat, some 265km away. Reducing the time spent travelling to training and matches allowed him to put that time into his football development.

He was able to train more regularly with the Rebels and spend more time with his teammates during the week, with the added advantage of also being able to train with the North Ballarat VFL team.

“I really got to understand the game a lot better and compete against bigger bodies, which was really good,” Marshall said of his experience with the VFL squad.

Being able to spend quality time with coaching legend Gerard FitzGerald had a big impact on Marshall and his football.

“Fitzy has been unreal, I have been lucky enough to actually work at the Rebels and spend three days a week with him,” he said.

“I understand an unbelievable amount more this year, things like running patterns and where to position myself around the ground and what I should be doing as a ruckman.

“I was even lucky enough to get a VFL game and have that experience earlier on in the year.”

Since the Rebels were bundled out of the TAC Cup finals, Marshall has been working hard in preparation for the Combine.

He has had a relatively injury free season, and unlike many rucks that can be quite sore and battle worn by the end of the season, is feeling fit and fresh.

Marshall’s main focus has been working on his endurance for the 3km time trial and beep test, but he has been training all of the other areas that are tested throughout the week.

Along with the physical preparation, Marshall has also been working on his interview skills with Rebels Talent Manager Phil Partington to be ready for the daunting experience of the AFL club interviews. Partington put the Rebels boys attending Combine through mock interviews that threw all kinds of questions at them.

“They put us on the spot a fair bit, but it was good practice that will allow us to enter these interviews prepared and ready to go.”

While Marshall’s athleticism and mobility for a ruckman stands out, his positive attitude and willingness to learn and absorb shines bright. It’s clearly evident by how far he has come in just 12 months.

Whatever happens this week at the Combine you know for sure that Marshall will be giving it everything he has, all with that familiar smile on his face.