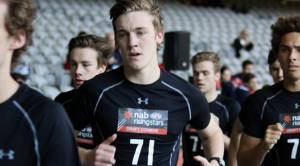 The NAB AFL National Combine came to a close, with a number of great times achieved by TAC Cup players in the final test - the 3km time trial.

Of the TAC Cup players, Murray Bushrangers Nathan Drummond had a Combine to remember, impressing with a top 10 finish in all but one test – the agility test – as he completed the 3km time trial in 9m59; one of only five players to achieve a sub 10 minute time. Dandenong Stingrays Tom Lamb produced the quickest time of TAC Cup players with a 9m45, produced in the first group of the afternoon, which backed up his 15.5 beep test the previous day.

Another 33 TAC Cup players will be put through their paces on Saturday in the NAB AFL State Combine on Saturday at Etihad Stadium.

Make sure you follow @TACCup on twitter for all updates Saturday on TAC Cup players and their testing times.