Elite experience not just for the players 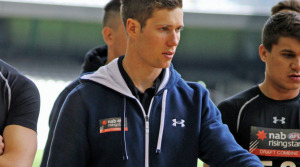 It is well documented that the TAC Cup is a development league for players, but it also provides development opportunities for club staff members across the full range of roles required to run a football club.

When one such opportunity arose for Josh Milner, the strength and conditioning coach at Gippsland Power, to step up at the recent NAB AFL Draft Combine he relished the chance.

Milner took on a role as a group manager at the combine. Working closely with the Medium Defenders group all week, he mentored the likes of Daniel Capiron, Jason Castagna, Jordan De Goey, Liam Duggan, Brayden Maynard, Jackson Nelson and Dillon Viojo-Rainbow.

Along with mentoring, and implementing the warm up and recovery process for the group, Milner also helped man the various stations during the testing.

The invitation to assist at the combine was a result of the effort Milner has put into his role at Power and his willingness to continuously develop his skills.

In the same way that players under his charge are striving to reach AFL levels, Milner aspires to ply his trade at the highest level.

A teacher at SEDA, Milner was able to spend seven days at the Hawks during the mid-year school holiday period as a part of a mentoring program with Russell.

“I helped out mainly in the weights room, but as I was able to get to know and build a rapport with the players and staff I was able to help with warm ups,” Milner said.

“It was a great experience, I was able to meet and learn from so many people.”

Milner was also fortunate enough to be able to work closely with the club rehab coordinator whose role is to bring back players who have been out with injury.

“He had Cyril (Rioli) recovering from a hammy and Josh Gibson from a pec muscle, I was able to see how they brought them back and worked on their match fitness, they were two really good examples.”

Milner knows what it takes to recover from injury all too well.

A sports fanatic growing up, football was Milner’s first choice. As a youngster from Warragul he played with Gippsland Power in the under 15’s and showed plenty of promise. But then injury struck and he missed out on playing under 16’s and TAC Cup.

“Being injured I was able to step back from footy and look at it from a different perspective.”

It sparked his interest in injury management and exercise science which has now turned into his passion.

“Teaching and working as a personal trainer for 6 years and just being involved with the elite systems has really pushed on that passion.”

“With my own injury experience I feel like I can relate to the draft prospects and the guys at Power better and help them both mentally and physically get back out on the ground and playing good football.”

In his role of group manager at the draft combine, Milner was able to help ease the potential draftee’s anxiety about the various tests and club interviews and keep them in a positive mindset.

“They had done the work throughout the year, they have all got the talent, they just needed to put their best foot forward and be both mentally and physically challenging themselves.”

While the athleticism of the international combine attendees, including Marvin Baynham‘s record breaking vertical jump, stood out to Milner, he was impressed with the performances of the Victorian boys.

“I think this draft a lot of Victorian’s will go, which is really positive.

“It shows that in the TAC Cup we are really focusing on athlete development rather than winning games.

“The TAC Cup is a good system for that, and I think going into the AFL the players have a better foundation which allows them to learn and develop the skills and the strength that they need.

It’s all been showcased at the combine.”

After a successful week at the combine taking everything in, Milner will continue to learn and develop his skills set heading into the new TAC Cup season.

Football at the elite level is a constantly evolving beast, the challenge for Milner as strength and conditioning coach is to be able to keep up with the changes and train players to be best prepared for the AFL system.

With more of a running element coming into the game, athletes are much lighter and faster but they still need to be strong.

“I am really trying to engross myself in and take as much as I can from the elite programs I have experienced and implement that in my role at Gippsland Power.”

He has completed a radical overhaul of Power’s entire training program that will see a much greater emphasis on tailored individual programs.

While preseason will be tough for the Gippsland boys, there is no doubt that they are in good hands.