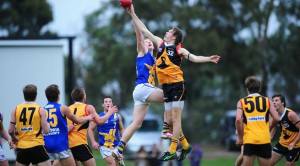 AFL Victoria’s male and female talent pathway will benefit from the $1.2 million redevelopment of the Keith Miller Pavilion at Shepley Oval in Dandenong, which was officially opened on the weekend.

AFL Victoria contributed $200,000 to the project, joining $312,000 of funding from the State Government’s Community Facility Funding Program, $650,000 from City of Greater Dandenong and $40,000 from Cricket Victoria.

Dandenong Stingrays Talent Manager Mark Wheeler said the venue upgrades now cater for the needs of all footballers in the region.

“The facility was something we always said we needed to get upgraded to give us a level playing field and now that we’ve got it, as it will help the players feel a little bit more comfortable each week when they come to training,” Wheeler said.

“At the recent Stingrays tryouts for the newly formed Youth Girls’ Academy we had 120-plus girls trying out for the squad, which highlights why female football is our fastest growing form of the game with over 30,000 female participants for the first time in 2014.”

The new Youth Girls' Academy will provide on and off field development opportunities for the region’s most promising under 18 female footballers.

In launching the pavilion, Sports Minister Damian Drum said the next crop of talented local players will benefit from the redevelopment.

"The Victorian Coalition Government is committed to a more active Victoria, and iconic sports venues such as Dandenong's home of football and cricket play a vital role when it comes to inspiring our state's next generation of champions,” Drum said.

"I have no doubt the improvements will go a long way to uncovering the region's next crop of cricket champions like Australian star James Pattinson and AFL footballers like Nathan Jones and Lachie Whitfield, who have all come through programs at Shepley Oval.

"This is a great example of state and local governments, sports associations and local communities working together to secure the future of sport and recreation and encouraging healthy communities."

It will also see the continuation and development of targeted participation programs such as the Indigenous Auskick program, Multicultural Cup and the Jimmy Toumpas Multicultural squad that was formed in 2014.