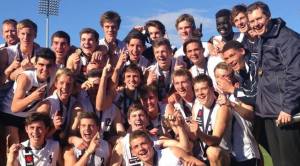 The coaching journey for Paul Henriksen will take its next big step, announced as AFL Victoria’s Vic Country Under 18 Head Coach for 2015.

The Terang College teacher has spent over a decade as a coach in the U18 system, performing a variety of roles with Geelong Falcons and AFL Victoria’s State Country Academy.

Henriksen is no stranger to the NAB AFL U18 and U16 Championship program, serving three years (2009-2011) as an U18 assistant coach under Robert Hyde, before taking on the role of U16 Vic Country coach from 2012.

In both roles he experienced Championship success, with the U18 team claiming the title in 2010 and the U16 team the 2013 champions.

“His location has restricted him coaching at TAC Cup level, but he has been an invaluable part of our Academy program over a number of years.

“This role fits in well with his skills set so we are looking forward to exciting times ahead.”

Henriksen is excited by his next challenge, with the opportunity to coach the best players in country Victoria.

“There is a lot of talent throughout Victoria both in Country and Metro, so to be coaching within an Under 18 State Academy will be provide both its challenges and rewards.

“It is an exciting opportunity that I’m looking forward to as the Nationals are a fantastic showcase of AFL talent,” Henriksen said.

The new role will reacquaint him with some of his 2013 U16 title team, with the likes of Rhys Mathieson, Josh Dunkley, Sam Skinner, Darcy Parish, Darcy Tucker and Gach Nyoun just a few of the players that progressed to gain selection at U18 Vic Country level in 2014.

“It will be good to work with some of them again, but two years is a long time in age based footy.

“Young players grow, mature and change at such a dramatic rate during that U16 to U18 age period,” Henriksen said.

“After being in the professional environments of their local TAC Cup clubs for a year, no doubt players have made changes to their game.

“Nevertheless, the added excitement of 2015 is the search for new or even unsighted talent that has not yet appeared on TAC Cup stage or in previous Championships.”

A prime example of discovering talent is former Geelong Falcon now Sydney Swan Gary Rohan, who as a17 year old was not on a TAC Cup list.

Henriksen was an assistant coach both at the Geelong Falcons and Vic Country U18 in 2009 when Rohan joined the Falcons as a top age player and not only won the 2009 Vic Country MVP, but was then drafted to the Swans at pick six in the NAB AFL Draft.

Rohan was just one of many talented players Henriksen has seen and been involved with during his coaching journey at TAC Cup and National level.

“There has been so much talent and so many stories.

“Players that I do reflect upon when they were going through the Geelong Falcons or the Nationals would include Pat Dangerfield, Dyson Heppell, Luke Parker, Ben Cunnington, Travis Boak, Allen Christensen, Jack Ziebell, Steele Sidebottom, Dustin Martin, Tom Rockliff, Devon Smith, Lachie Whitfield and Jordie McKenzie to name a selected group.

“They were all different, and all similar in many ways.”

Henriksen has gained valuable experience under a number of coaches over the journey, with former Geelong Falcons coach Garry Hocking having a huge impact on his coaching career.

“He taught me to think outside the square and be innovative in coaching.

“He taught me a lot about perspective, on and off the field, and how it can interact with your coaching.

“More importantly, Garry gave me one of the most important ideals in any footy - an opportunity.”

Henriksen takes over the U18 coaching role from Mark Ellis, who will next year take on an assistant High Performance Manager role under Leon Harris over the course of the year.