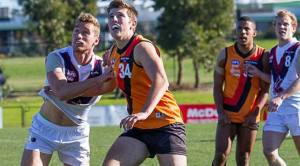 Andrew Johnston will take over from Andrew Jago as Head Coach of the Calder Cannons after Jago stepped down from the role at the end of the season.

Jeremy Barnard takes over the reins at Sandringham Dragons from Justin Plapp, was has been appointed to a development role at Melbourne FC, which includes the senior coaching role at Casey Scorpions in the VFL.

AFL Victoria High Performance Manager Anton Grbac said the calibre of people applying for the two roles was again of a high standard.

“We know when these positions become available that we are going to attract well-credentialed candidates who are looking to advance their coaching skills and help develop the players within our talent pathways.

“To have people who know the system and have been involved before like Andrew and Jeremy will only benefit the Calder Cannons and Sandringham Dragons programs.

“We wish both of them all the best for their new coaching positions, and thank Andrew Jago and Justin Plapp for their role in helping develop the players in each of their programs during their time in the system.”

Both Johnston and Barnard are no strangers to the TAC Cup system, having previously been involved in a variety of roles.

Johnston will return to the Cannons where he was Development Manager from 2006 to 2009, after holding a similar role with the Eastern Ranges between 2001 and 2005.

Since 2010 he has been involved as the Gold Coast Suns AFL Development Coach, NEAFL Assistant and Academy manager, before having a role with the Suns’ AFL team game day.

We welcome both coaches to AFL Victoria’s TAC Cup program and wish them and their young families all the best in their pursuits.