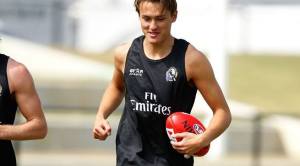 Darcy Moore is one of the lucky TAC Cup players in the lead up to the 2014 NAB AFL Draft on November 27.

Collingwood has already committed to Darcy, the son of Peter Moore who played 172 games for the Magpies, with the Oakleigh Chargers premiership captain set to don the famous number 30 he has worn with distinction at TAC Cup level, but more importantly worn by his dad during his time at the highest level.

It was a no brainer for Collingwood to use its number 9 pick on Darcy, after he was named in the All Australian side at the NAB AFL U18 Championships, was selected centre half forward in the TAC Cup Team of the Year and showcased the development of his skills throughout the TAC Cup finals.

It is time now to find out more about Moore.