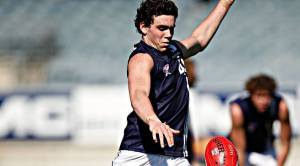 Patrick McCartin is tipped as a top five selection in the 2014 NAB AFL Draft - not bad for someone who played only five games in the TAC Cup in 2014 for Geelong Falcons.

Despite a combination of injury, AIS/AFL Academy commitments and Vic Country selection, McCartin proved he would be one of, if not the best, forwards in the 2014 draft with 20 goals and an average of eight marks a game for the Falcons.

We look at some of McCartin's highlights, and find out a bit more about the player off the field: