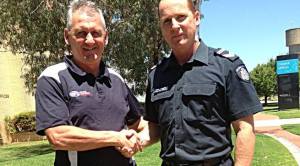 AFL Victoria is pleased to announce Leon Higgins as the new Vic Country U16 coach for 2015.

Higgins takes over the role from Paul Henriksen, who was last month appointed to the role of Vic Country U18 coach.

The former Sydney and Hawthorn half forward has a long association with country football, most recently involved with the Murray Bushrangers over the last seven years in various coaching roles.

During that time Higgins has also served as an assistant coach for both the Vic Country U16 and U18 teams.

AFL Victoria High Performance Manager Leon Harris said Higgins will benefit from previous involvement in the program and brings a wealth of knowledge to the role.

“Leon will be a great asset to the U16 squad with his experience at all levels of the game.

“He has been involved with the Academy program previously, and his current role as a Youth Resource Officer (YRO) in the Wangaratta Police Service Area provides him with a great understanding of the age group he will be coaching as he helps with their development both on and off the field.”

Next year Higgins will continue his involvement with the Murray Bushrangers in the role of Development Coordinator, supporting the bottom age players whilst working closely with the development coaches.

AFL Victoria wishes Higgins all the best for the new coaching role.