Who will go number 1? 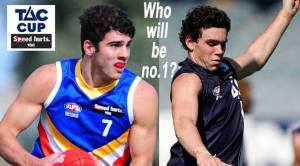 The NAB AFL Draft is this Thursday night, and the big question is: who will go number 1?

Media experts believe it is a race in two, with Eastern Ranges Christian Petracca and Geelong Falcon Patrick McCartin the players St Kilda have their main focus on. Or will it be a smokey like Sandringham Dragon Angus Brayshaw who many have locked in at pick 2?

Melbourne, who have picks 2 and 3 in the Draft, will be waiting patiently to find out the Saints selection, as will the supporters of each club to discover who will be on their list in 2015.

Petracca has been the favourite for the top spot over the last month, winning the Larke Medal as best player for the NAB AFL U18 Championships earlier in the year, having averaged 25 disposals a game both at the Championships and during the home and away season. His move into the midfield this season has added another dimension to his game, with his ability to break tackles and accurate kicking the key to his game.

If Petracca is selected first, he will be the third Eastern Ranges number 1 pick in the last four years, joining Jonathon Patton (2011) and Tom Boyd (2013).

McCartin has been the player than has moved to the top of Phantom Drafts over the last few days, as many believe St Kilda will look to bolster its forwardline with the key position Falcon. A strong mark on the lead and an accurate kick for goal sees McCartin ranked as the best forward prospect in the Draft. Despite only five TAC Cup games this season and three Championship matches for Vic Country due to injury, the signs were still obvious of his potential as he averaged eight marks a game in the TAC Cup and gained All Australian selection at the U18 Championships.

If McCartin is selected at number 1, he will be the first Geelong Falcon taken in that spot since Luke Hodge back in 2001.

All will be revealed this Thursday night – follow @TACCup on twitter for full coverage of the TAC Cup selections.