TAC Cup produces over 50% of draftees 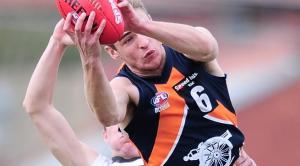 It was the third highest tally of draftees across the 23 years of the competition, with the 45 players selected falling just short of the 46 in 1997 and 53 in 1994.

Calder Cannons led all regions with seven draftees, followed by six to Sandringham Dragons and five each to Western Jets, Oakleigh Chargers and Geelong Falcons.

All 12 TAC Cup regions were represented on Draft night, with at least one player being selected.

AFL Victoria State League and Talent Manger John Hook said the high draft numbers was a reflection of the depth of talent in the system.

“It is pleasing to see the continued high esteem AFL Victoria’s TAC Cup competition and talent pathway is held by AFL clubs; again producing over half of the selections made on draft night.

“The hard work of all involved should be recognised, from the local community club coaches, to the many people involved in the TAC Cup system including TAC Cup coaches, Talent Managers and our High Performance Managers that oversee our Academy programs,” Hook said.

“As well as the people within each region that have helped with the development of these players, we must also thank the TAC for its continued support which is invaluable to our organisation.”

Geelong Falcon Patrick McCartin was selected at number one in the draft by St Kilda, the fourth year in a row a TAC Cup player has received that honour following on from Jonathon Patton (Eastern Ranges 2011), Lachie Whitfield (Dandenong Stingrays 2012 and Tom Boyd (Eastern Ranges 2013).

Once again a high number of Vic Country (12) and Metro (25) Academy players were drafted, making up 37 of the 45 TAC Cup selections.

Collingwood and Western Bulldogs both selected four TAC Cup players each, with Oakleigh Chargers pair Darcy Moore and Jordan De Goey both heading to the Magpies, and TAC Cup grand Final best on ground Toby McLean headed to the Bulldogs.

For those that missed out, another opportunity to join an AFL list will be presented on Wednesday December 3 with the NAB AFL Preseason and Rookie Drafts.

CLICK HERE to see information about the Victorian top 10 selections