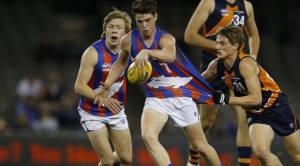 The season will kick off with Metro Round on Sunday March 22, with 17 rounds across the year.

Country Round will be held on Saturday April 11 in Bendigo with all six country teams heading to Queen Elizabeth Oval, while regional areas including Benalla, Albury, Hamilton and Shepparton will host TAC Cup games in 2015.

The first ever Good Friday games will be played in the TAC Cup, with Gippsland Power (Morwell Recreation Reserve), Bendigo Pioneers (Epsom Huntly Reserve) and Eastern Ranges (Bayswater Oval) to all host these historic matches.

Interstate sides New South Wales (seven games), Queensland (five), Tasmania (four) and Northern Territory (two) will again compete in the competition throughout the season - both before and after the NAB AFL U18 Championships – with the Championships kicking off for Vic Country and Vic Metro on May 24.

Two TAC Cup matches will be curtain raiser matches to NEAFL games when Murray Bushrangers (Round 8) and Northern Knights (Round 9) head to the Northern Territory, while Geelong Falcons (Round 15 & 17) and North Ballarat Rebels (Round 17) feature in a number of VFL/TAC Cup double header games during the season.

AFL Victoria General Manager Steven Reaper said 2014 was another successful year for the TAC Cup competition with 60 players drafted and development opportunities provided to a large number of local and interstate players.

“The pleasing aspect from 2014 was not only the number of players that were drafted, but also the development opportunities provided to players with the addition of more games against interstate teams.

“We believe the high standard of football that the TAC Cup offers provided more chances for both local and interstate players to compete against the best talent from around Australia at not only a NAB AFL U18 Championship level, but now within their own competition,” Reaper said.

“To see the likes of NAB AFL Draft selections Isaac Heeney and Lachlan Weller play in the TAC Cup against our best players is also a huge bonus for the supporters that follow the competition as well.”

In the various NAB AFL Drafts, 45 players were selected in the November Draft, and another 15 were given an AFL Rookie position.

“With over 60% of the 38 draftees from 2013 playing an AFL game in their first season this year – including NAB AFL Rising Star winner Lewis Taylor – we look forward to seeing names like McCartin, Petracca and Brayshaw make their highly anticipated debuts for their respective clubs next season,” Reaper said.

“We also look forward to seeing the next crop of potential draftees take to the field in AFL Victoria’s TAC Cup competition throughout the 2015 season.”

For those TAC Cup players that did not have their names called out on draft day this year, the AFL dream is not lost just yet.

“We have already seen a number of TAC Cup players that were not drafted sign with Peter Jackson VFL clubs, looking to further develop their game and hopefully follow in the footsteps of VFL draftees like Nic Newman, Adam Saad and Kane Lambert who had all previously played in the TAC Cup.

“We will also see a number of players return as 19 year olds in 2015, and the fact that seven players were drafted under this policy this season from the TAC Cup proves how beneficial for development an extra season in the competition can be.”