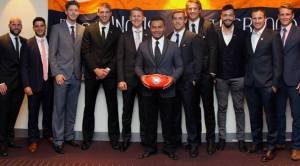 The rich 20 year history of the Calder Cannons in AFL Victoria’s TAC Cup competition was celebrated at Etihad Stadium with the clubs inaugural Hall of Fame night.

A number of club administrators and former players were first inductees into the Cannons’ Hall of Fame, which recognised service to the club and achievements by players that have gone on to decorated AFL careers.

The club also announced on the night a Team of the first 20 years from its over 120 draftees and rookies, boasting a star studded line up of current and former AFL players.

AFL Vic TV headed to the function to catch all the action and speeches from the likes of Paul Chapman, Jude Bolton, Ryan O’Keefe, Tom Lonergan, James Kelly, Daniel Talia, David Rodan, Ryan Crowley, Richard Douglas and Ivan Maric plus we reveal the Team of the first 20 years.

The inaugural Hall of Fame inductees were: