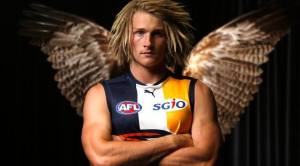 Versatile West Coast Eagles recruit Tom Lamb kicked his first goal for his new club on Friday night as part of the Eagles come from behind eight point win over the Indigenous All Stars.

The former Dandenong Southern Stingray kicked a goal in the final term to help his side gain the momentum in their clash against the All Star side that featured a number of former TAC Cup players including Jay Kennedy Harris (Oakleigh Chargers/Melbourne), Jarman Impey (Murray Bushrangers /Port Adelaide) and Jake Neade (North Ballarat Rebels/Port Adelaide).

West Coast selected four TAC Cup draftees last November with Lamb joined on Friday night by fellow debutant former Geelong Falcon Jackson Nelson, who had his work cut out in defence playing on the likes of the Hill brothers and Shane Edwards.

It is hoped the Eagles will unveil its other two recruits in Liam Duggan (Western Jets) and Damien Cavka during the NAB Challenge to play Carlton, Port Adelaide and Fremantle

See below video of how the former TAC Cup pair found their first game in the West Coast jumper.