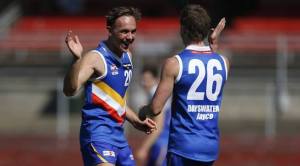 Oakleigh Chargers had a 59 point win over Northern Knights, Eastern Ranges had a massive 122 point win over Western Jets and Calder Cannons defeated Sandringham Dragons by 27 points in the first round of the TAC Cup. Let’s take a look at some of the highlights:

Carlton fans thought they had stepped back in time seeing Silvagni and Bradley playing on Ikon park last Saturday afternoon. The sons of two Carlton legends went head to head with Jack Silvagni playing his first game for Oakleigh and Jake Bradley playing for Northern.

Oakleigh held Northern to just 1 point in the last quarter while they piled on 5 goals 4 behinds.

Michael Mattingly from the Knights was the ‘Mr Effective’ of metro round, with a huge 17 effective kicks.

Big Ivan Soldo amassed 22 hitouts in the ruck for Northern, but this was outdone later in the day by Calder’s Mark Kovacevic with a dominant 33 hitouts.

Eastern Ranges put on some kind of second half against Western Jets that was all about the number 8. They kicked 8 goals in the 3rd term, and another 8 goals in the final term to finish with a whopping 26 goals for the match.

The lucky number 8 theme continued for Eastern with medium forward Blake Hardwick kicking 8 goals for the match. Hardwick had a day out, finishing with 8 goals, 2 behinds, 14 kicks, 11 marks and 3 tackles.

It not the first time that Hardwick has kicked a bag in a TAC Cup match, he actually kicked 8 goals against Geelong Falcons last year.

The Ranges’ Ryan Clarke was a tackling machine with 10 tackles

Hisham Kerbatieh helped seal the game with two massive goals for Calder Cannons from outside 50 in the final term.

See below highlights from Round 1.