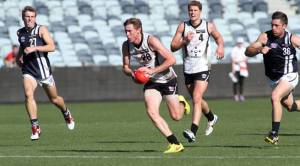 We take an in-depth look at the finalised team lists for season 2015 in the TAC Cup and bring to life some of the interesting facts and figures for the competition.

In all there are 641 players across the 12 teams in the TAC Cup this season – in comparison there are 811 listed players in the AFL.

Sandringham Dragons have the biggest squad with 72 listed players, with half of the list also having school football commitments. That’s a lot of team mate’s names to learn!

Gippsland Power has the smallest squad with just 40 listed players.

The youngest player in the competition is Dandenong Stingrays Reece Piper who doesn’t turn 17 until December 30.

They breed them big up North! Murray Bushrangers are the tallest team in the competition with an average height of 187cm. The bushies have the tallest player in the league, Kyle Galloway who stands at 206cm (6ft9) that’s just 5cm shorter than AFL ruckman Aaron Sandilands.

With the shortest player in the AFL now standing at just 167cm (Caleb Daniel, Western Bulldogs) and  Lewis Taylor (Geelong Falcons/Brisbane Lions) winning the 2014 NAB Rising Star award as a 173cm midfielder, the old football prototype has been rewritten. There are seven players under 170cm in the TAC Cup this season. Kurt Lopo from Sandringham Dragons is the shortest player in the league standing at 166cm, closely followed by Western Jets team mates Jackson Volpato and Tyler Crennan and Gippsland Anthony Young at 167cm.

There are a number of junior clubs represented across the competition, Albury, Aberfeldie and Beaumaris have the most players on TAC Cup lists with 8 players each, followed by Xavier College and St Josephs (Geelong) which all have 7 representatives.

See below full team lists for each TAC Cup club