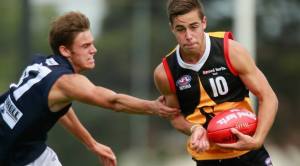 Murray Bushrangers long trip home was made sweeter with a 45 point win over Gippsland, North Ballarat got the better of their country neighbours Bendigo Pioneers, Northern Knights had their first win of the season defeating Sandringham, Eastern’s good first term set up a strong win over Calder, Oakleigh hit the top of the ladder defeating Western and Dandenong overcame a slow start to beat Geelong by 34 points.

Good Friday TAC Cup football proved to be a big hit with footy fans, larger than usual crowds attending the 4 games across the day.

North Ballarat Rebel Matthew Johnston was the leading goal kicker for the round. He bagged 6 as his team went on to defeat the Pioneers by 80 points.

Murray Bushrangers again proved to be too big and too strong, running over the top of Gippsland Power in the last term. The Bushies ended up with more goal scorers than Power had goals, their run and ball movement hard to stop when they get going.

Speaking of goal scorers, how about the Oakleigh Chargers, they had 13 different goal scorers in their win over Western Jets.

Daniel Capiron’s experience and leadership played a big role in the Stingrays defeat of Geelong, Capiron picking up best on ground honours for his performance. His teammate Cory Machaya picking up a different honour, with the mark of the round (see highlights below).

Northern Knights led all day against Sandringham, finishing with a 49 point win and it was the Knights captain Jade Gresham that led from the front. Gresham had 39 disposals and slotted through two goals.

Eastern Ranges moved into third position on ladder with a 26 point win over Calder Cannons. A 6 goal to 1 first term did all the damage. The rest of the quarters remained tight but the Cannons just couldn’t assail the initial 5 goal difference.

See the full Round 3 TAC Cup Review highlights below: