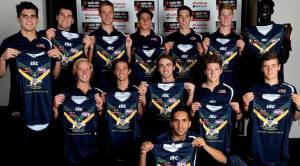 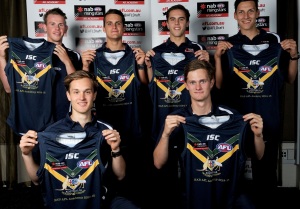 The 35 NAB AFL Academy Level Two players received their Australian jumpers last Saturday night at a dinner that highlighted what an honour it is to represent your country.

The godfather of talent management, AFL National Talent Manager Kevin Sheehan reinforced just how special it was to be a part of the Academy, but pointed out to the group that it wasn’t a ticket straight into an AFL club.

“The academy is not about guarantees to get drafted, it’s about providing opportunities,” Sheehan said.  Seizing the opportunity is up to the individuals.

He urged the Academy members to learn about being as good as they can be from the people around them.

With the likes of Lenny Hayes, Brad Jonhson, Matthew Lloyd, Brad Ottens and Glen Jackovich involved in the program, there is certainly quality people around to learn from.

Sheehan is passionate about the Academy and seeing players develop. He shared the story of a young Brenton Sanderson who was one of the first ever players involved in the program. Completing the footy circle of life, Sanderson is now the head coach.

Sanderson, who previously coached the Adelaide Crows, has been impressed by the traits shown by the Academy players he has worked with so far. He told the dinner that there were future AFL captains amongst the group.

He emphasised the Academy culture which focuses on team first football and the importance of being part of the team, and urged the players to enjoy their football.

Listen to a full interview with Brenton Sanderson regarding the NAB AFL Academy, or CLICK HERE if you cannot access the audio player below

After travelling to and playing in countries all over the world, the Academy has brought their games back to the grass roots of football, suburban Melbourne, playing against Peter Jackson VFL teams.

While the scoreboard showed that Werribee had a convincing win against the Academy at Simmons stadium, it didn’t really reflect the quality of the match.

"Ultimately due to our age and experience we couldn't match it for long enough. But we showed some patches where it was a real snapshot into the future," Sanderson told the AFL website post match.

This week the Academy members will replicate an AFL week as closely as possible leading into their match against Northern Blues.

They will spend a day at Melbourne football club and a day at Richmond learning about club culture and the inner workings of AFL clubs, along with their own daily training sessions and team meetings.