Debuts aplenty in Round 1 AFL 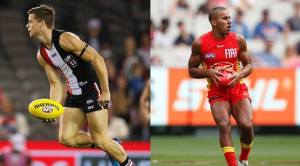 Round 1 of the 2015 AFL season was an exciting time for the draftees who were given the opportunity to play their first AFL game.

While some tasted victory in their first outing others felt the pain of defeat, but for all of these young men, stepping out onto the field for the very first time as an AFL player is a moment that they will never forget.

Angus Brayshaw played the first three quarters of the match for the Demons and finished with very respectable first game stats, but it was his 9 tackles and defensive pressure that won him the praise of Melbourne supporters and coach Paul Roos.

On April 4, 2014 Jaden McGrath played for the AFL Academy against Collingwood VFL. Skip forward twelve months to April 4 2015, and Jaden McGrath was making his AFL debut for Brisbane Lions against Collingwood. McGrath overcame a horror run with injuries in 2014 including a wrist injury, patella tendinitis and a hamstring tear. It led to him only playing 6 matches for Bendigo Pioneers in his final year, but since making it through the NAB AFL Draft Combine and being selected by the Lions McGrath has gone from strength to strength.

Being the sub in an AFL match isn’t an easy task, most will get put into the game in the final term but they must be ready to go at any moment. Tom Lamb certainly wasn’t expecting such an early sub, but with teammate Mitch Brown going down with a knee injury midway through the first quarter Lamb was injected into the game. He finished with 10 disposals, 4 marks and kicked his first AFL goal as the Eagles went down to the Bulldogs in a thriller.