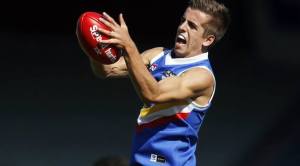 They might not be eligible for the AFL draft until 2016, but the Level 1 AFL Academy members put their skills on display for recruiters last weekend, playing a match against the New Zealand Hawks at Westpac Stadium in Wellington.

The trip also had a significant cultural and educational component. The group attended an Anzac Day dawn service and spent time learning about New Zealand culture with a visit to the Museum of New Zealand.

The side played in a curtain raiser to the St Kilda versus Carlton AFL game, with the Academy continuing its winning streak in NZ, notching up win number four by 86 points.

"Whether Brodie played forward or midfield he was just all class. His ball-winning ability, his step through the traffic and goal sense made it a pretty complete performance," AFL's National Talent Manager Kevin Sheehan told the AFL website.

"Ben Ainsworth also performed well. He's just an absolutely brilliant kick for a goal – whether it be as a set-shot or snap kick. He's strong overhead for a boy his size and he was dynamic as a small forward."