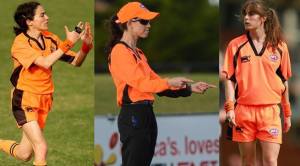 History will be made this weekend in AFL Victoria’s TAC Cup competition with the first ever game featuring an all-female umpiring panel in the leading U18 competition.

The match between Oakleigh Chargers and North Ballarat Rebels will be umpired by six women that are currently on the various AFL Victoria Umpire Panels, along with two girls from the boundary umpire rookie squads in 2015.

AFL Victoria State League Umpiring Head Coach Cameron Nash believes the appointment of an all-female umpiring panel will be a landmark day for the state’s umpiring fraternity, and a sign of things to come in the future.

“This is a fantastic story and promotion of the TAC Cup competition and females in umpiring.

“To be able to appoint these women to a match all together shows how far the growth and development of females in umpiring has come and it will continue to grow,” Nash said.

Female numbers across the three umpire disciplines have tripled in 12 months, with the AFL Victoria umpiring squad now boasting three female field, one boundary and two goal umpires, plus a number of female umpires in the rookie squads.

"It is fantastic that we can go from having two female umpires just last year to six this season, and that is due to a lot of hard work being done at local umpiring groups.

“This shows more females are taking up umpiring and that there is a genuine pathway for them to reach the top levels."

The AFL has thrown its support behind the development of female umpiring at state level, with Lucinda Lopes and Eleni Glouftsis both on AFL Female Pathway Scholarships.

The pair spent the preseason with the AFL umpiring group, with the aim to fast track their development.

Joined by Libby Toovey, the trio one day hope to umpire in the VFL senior ranks, then join female pioneers like AFL goal umpires Chelsea Roffey, Rose O'Dea and Katrina Pressley who have made it to the elite level.

Nash said it is pleasing the three AFL Victoria female field umpires will now develop together at this level, with Lopes already showing great improvement after 12 months on the list.

"Lucinda improved with each game as the season progressed last year.

“Going into her second season she knows now what to expect at this level and we will see further development.

“For the girls to go through the system together and learn from each other will be good for their development."

In her first season as an AFL Victoria umpire - after transferring across from the SANFL to take up her scholarship - Eleni Glouftsis is still pinching herself about the opportunity she has received.

After replying to an umpiring ad in her high school daily bulletin when she was in year 9, Glouftsis in now in her tenth and most challenging year as a field umpire.

“I have learnt so much already from being in Melbourne for the last four months.

“Through training with the AFL group, I have been able to see firsthand the dedication, commitment, professionalism and hard work needed to perform at an elite level,” Glouftsis said.

“Both the AFL and VFL groups have been so welcoming and friendly and I have really enjoyed the training and games so far.”

One of the highlights of the scholarship is being coached by 383 game, four time AFL Grand Final umpire Stephen McBurney. His experience in the game has provided the girls with the perfect coaching tool to progress their umpiring further.

“Lucinda and I are very fortunate to have Stephen McBurney as our female pathway coach.

“Stephen provides a wealth of knowledge, experience and specific feedback for us to work on week to week.”

The feedback will be something the umpires use to progress from umpiring the TAC Cup, to development league and then finally senior football when they are added to the senior panel.

Before they progress to that level, they have the chance to umpire together this weekend for the first time as a group.

The opportunity to umpire this weekend with her fellow females on the panel is something Glouftsis looking forward to.

“You get used to hearing the boys voices on the field, so it’s always fun to hear a girl’s voice calling ‘yours’.

“I think it’s really exciting for AFL Victoria to have a group of girls coming up through the ranks and occasions like the game this Saturday are a great way to promote females in umpiring.”