Knights & Rebels drive to the game 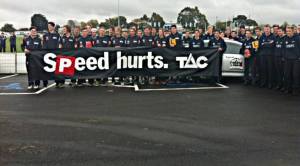 The activity, part of the TAC program for clubs, will see the Learner Drivers from both teams asked to drive to this week’s Rd 7 TAC Cup clash at Eureka Stadium, North Ballarat.

This initiative provides an opportunity for all ‘L’ Plate drivers from both teams, to gain over an hour’s driving experience in a range driving conditions.

In the Knights case, drivers will experience both city streets and country highways, as they embark on their journey from metropolitan Melbourne to North Ballarat.

For the Rebels’ drivers, they will gain valuable experience and encounter different factors such as sealed and unsealed roads in rural Western Victoria.

“Both clubs care about the safety and well being of our squad members and are committed to conveying TAC’s ‘Speed Hurts’ message to our players, their parents and the wider football community,”Kennedy said.

Road crashes are the biggest killer of young people aged 16 to 25.

In their first year of driving, young people are about three times more likely to be killed or injured than older more experienced drivers.

However, extensive research has shown that by gaining valuable driving practice in a range of different driving conditions, young drivers can reduce their risk of crashing by up to a third.

While the two rival teams are united in this ‘drive to the game’ initiative, it will soon turn to an on-field battle for the 4 points, once the siren sounds.