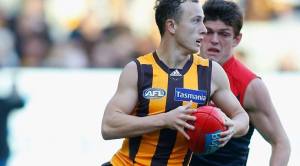 The 20-year-old small midfielder played his best game for the Hawks in the big win over Melbourne at the MCG on Saturday.

Billy recorded 100 percent disposal efficiency with his 26 possessions, five marks and a goal.

He has played five consecutive games this season after an elbow injury restricted him to seven games in 2014.

Billy was selection 24 2013 NAB AFL Draft and came to the Hawks with exceptional endurance and speed.

He was recruited from the Mt Martha Junior Football Club and the Dandenong Stingrays. He represented Vic Country in the 2013 NAB AFL Under-18 Championships and was named an Under-18 All-Australian after playing four games on the wing.

His elite endurance was highlighted during the 2013 NAB AFL Draft Combine when he set new record in the beep test running a 16.6.

“We have been pleased with Billy’s development. He has worked hard over the preseason and that has been rewarded with five senior games so far this year.

“Our depth is a great feature of our club and it is pleasing to see our younger players, including Billy, taking their opportunities at a senior level.”