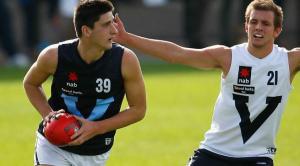 This Sunday the 2015 NAB AFL U18 Championships kick off with AFL Victoria’s Vic Country and Vic Metro teams going head to head in Round 1 of the six round program.

Both the Country and Metro Academies – proudly supported by Dairy Australia and their Legendairy campaign – have submitted an initial list of 50, which will be cut to 40 after the first round.

The squads boast the best players currently in the TAC Cup competition, with 38 players from the Academies drafted in the 2014 NAB AFL Draft alone.

Over the days leading up to the Championships we will catch up with some of the players and coaches from each team.

See below the two initial squads leading up to Round 1.