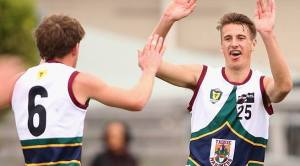 TAC Cup squads will be travelling across the country this weekend as the four interstate teams take the field in the same round for the first time this season.

Tasmania will be looking to maintain its perfect 2015 strike rate with a third victory of the year against the Bendigo Pioneers in Hobart. The Mariners have been devastating in wins against the Sandringham Dragons (by 59 points) and Northern Knights (60 points), and the winless Pioneers will particularly need to keep an eye on Nick Dodge, who has been dominant in Tassie’s two matches with eight goals to his name.

Queensland will be looking to break its 2015 duck after two tight losses to the Dandenong Stingrays (by 14 points) and Gippsland Power (one point) when the Oakleigh Chargers travel to the sunshine state this weekend. The Chargers will have to overcome a Queensland squad featuring talented youngsters Ben Keays and Eric Hipwood to improve on their 4-3 start to the season.

The NSW/ACT Rams will attempt to make it four wins from four forays into Victoria this season when they take on the 5-2 Eastern Ranges at Box Hill City Oval. Boasting a squad packed with top-end talent, the Rams have only lost once in 2015 against the Murray Bushrangers in Albury. Eastern will need to put some effort into stopping NSW/ACT’s Matt Kennedy, Jock Cornell, Matt Flynn and Ryan Hebron, who have consistently been named in their team’s best players.

The Northern Territory plays its first match of the season at TIO Oval this weekend, when Murray Bushrangers leave Victoria’s cooler climate behind in search of its sixth win of the year. This will be the first of only two matches the Thunder play in the TAC Cup in 2015, ahead of a date with the Northern Knights back at TIO Oval in Round 10.

In other Round 9 TAC Cup action:

-      The fourth-placed Dandenong Stingrays meet the Northern Knights at Shepley Oval, where the Knights will attempt to arrest a four-match losing streak;

-      The Gippsland Power host the Calder Cannons at Morwell Recreation Reserve in a vital match for two teams hovering on the edge of the top eight;

-      The Western Jets face the challenge of chalking up their second victory of the season against a strong Geelong Falcons team at Avalon Airport Oval; and

-      The North Ballarat Rebels will look to maintain their ownership of top spot on the ladder when they meet the Sandringham Dragons in Ararat.