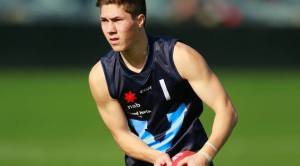 The first-ever indigenous captain of the Northern Knights is following in the footsteps of several prominent figures as he takes his game to another level in 2015.

Jade Gresham knows his heritage. Through his mother’s side of the family, he can trace his ancestry to the Yorta Yorta tribe, traditional owners of an area of the Murray Goulburn region in northern Victoria and southern New South Wales.

Sharing Yorta Yorta ancestry with Gresham are highly-respected former West Coast Eagles player David Wirrpanda and current Carlton Blues utility Andrew Walker, with his heritage to be celebrated this weekend as part of Indigenous Round.

After a blistering start to the TAC Cup season, in which Gresham is averaging 32 disposals, 5 tackles and one goal per game through seven matches, there’s a high chance he’ll emulate Wirrpanda and Walker by joining the AFL ranks come next year.

It may even be with Walker at Carlton, the team Gresham supports. A talented midfielder/forward who can win the ball on the inside of the contest as well as outside might be just what the Blues need at the moment.

When asked which current AFL players he likes to model his game on, Gresham found it hard to go past two stars of the game.

“Probably Trent Cotchin – someone who can play an inside and outside role. A bit of Travis Boak too,” Gresham said.

Indeed, Gresham’s stats so far in 2015 are Cotchin and Boak like, and his performances for the Knights saw him selected to play in Vic Metro’s opening match of the NAB AFL Under 18 Championships at Simonds Stadium last Sunday.

Gresham successfully filled that midfielder/forward role as Metro lost to Vic Country in heartbreaking circumstances, with a goal kicked after the siren to clinch victory for Country.

“It was a big step up from the TAC Cup,” Gresham said.

“(The result) was pretty disappointing but it was just good to be out there, and we all had a crack so we were pretty proud of our efforts.”

Gresham’s efforts to make it to where he is now are reminiscent of another young indigenous player to have captained his TAC Cup club, current Melbourne and former Oakleigh Chargers captain Jay-Kennedy Harris.

Like Kennedy-Harris, Gresham came through the AFL’s Flying Boomerang program as an Under 15 and 16 player, an initiative for talented young indigenous players in which the focus is on personal development as much as developing participants’ football ability.

He travelled to South Africa with the squad and received guidance from other respected indigenous figures in former Adelaide Crows champion Andrew McLeod and ex-St Kilda players Xavier and Raphael Clarke.

He soon graduated to the Northern Knights program, a club where another strong influence – his father – once played.

“He just gives me a bit of advice – what I could do better, what I’m doing well,” Gresham said.

“He’s someone to talk to about footy.”

All these life influences led Gresham to be voted in as the Northern Knights captain by his coaches and peers this season.

Gresham said he was “pretty honoured” by the vote of confidence and that his style was to “lead by example on and off the field by doing all the right things”.

With a 1-6 record to start the TAC Cup season, the Knights will be in need of Gresham’s continued leadership in order to turn their season around.

“I think it all starts at training,” he said. “(We need to) focus on what we need to improve on and just work on that through training.”

As Indigenous Round is celebrated this weekend in the football industry, Gresham seems to be channelling his family’s spiritual animal totem, the long-neck turtle.

The turtle is associated with staying determined in your efforts while on the path to reaching your goal.

A combination of important life influences and his own determination to reach that goal has Gresham set to make a big impact in the football world in future years.