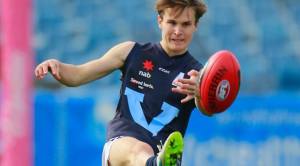 Trailing by 25 points at quarter time, the young Metro side with seven U18 Championship debutants steadied for the remainder of the match.

The home side had eight players that had gained SANFL senior selection this season, and their experience showed early with their pressure on the ball carrier, forcing numerous turnovers by Vic Metro.

SA’s Aaron Francis proved a brick wall that Vic Metro struggled to overcome, with the SA defender a clear best on ground for the home side with 17 disposals, but more importantly 12 marks – 11 of those intercept marks.

Ben Crocker (Oakleigh Chargers) broke through for Metro’s first goal of the match 14 minutes into the second term after SA had led by 38 points; kicking the first six goals of the game. From that point on Metro outscored SA, but were made to pay for its slow start to the game.

Best for Metro was vice captain Nick O’Kearney (Calder Cannons) who led the way with 28 disposals to be a key for his side in the middle of the ground.

Jade Gresham (Northern Knights) was consistant across four quarters with 27 disposals, as did Harley Balic (Sandringham Dragons) with 26 (18 handballs).

Eastern Ranges pair Jarrad Smith and Jayden Collins worked hard for Metro in the ruck in the absence of Mark Kovacevic, but the back six were kept under constant pressure with SA winning the inside 50 count 52-38.

Vic Metro's next match is against Vic Country on Sunday June 7 and Simonds Stadium.