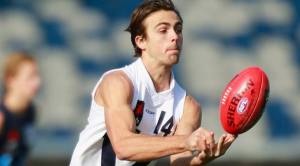 A dominant performance in front of goal by big man Josh Schache (Murray Bushrangers) was the highlight of Vic Country’s 105-point defeat of Western Australia at Medibank Stadium in Round 2 of the NAB AFL U18 Championships.

199cm Schache booted 8.4 – including four majors in the final quarter – to go along with 24 disposals and seven marks, helping Country record its second win of the Championships following a thrilling victory over Vic Metro in Round 1.

Rhys Mathieson (Geelong Falcons - pictured) was Country’s prime mover through the midfield, racking up game-highs in disposals (27) and clearances (seven).

WA was never in the contest after Schache started the match in ominous touch by having three shots on goal in the opening 10 minutes. He had 2.3 on the board before quarter time while WA could only manage two behinds for the term.

Country had opened up a decisive 34-point lead at the first break and it only grew larger as Holmes, Ainsworth and McKay joined in on the goal feast in the second quarter. Even with a comfortable 55-point advantage heading into the second half, Country didn’t let up on their opponents, running out the match in devastating fashion.

Vic Country’s next assignment is a rematch with Vic Metro at Simonds Stadium on Sunday June 7.