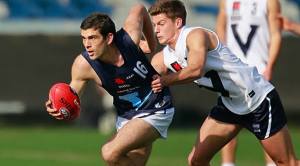 This weekend Vic Country and Vic Metro meet for the second time in the 2015 NAB AFL U18 Championships.

The Round 1 game was one to remember, with Murray Bushranger Jy Simpkin kicking the winning goal after the siren to give Vic Country the perfect start to the 2015 Championships.

Vic Country last week accounted for WA by 105 points to remain the only undefeated side in Division 1, while Vic Metro gave up a six-goal start to SA to suffer at 25-point defeat over in Adelaide.

Both teams return to Simonds Stadium on Sunday at midday for their Round 3 clash, with Country and Metro supported by Dairy Australia.

Country will have up to five changes, with injuries to Bailey Rice (Dandenong Stingrays) and Sam Skinner (Gippsland Power) keeping them out of the lineup. Geelong Falcon Darcy Parish returns from injury for his first Vic Country game of 2015, along with 19-year-old Daniel Capiron, who has played the last two games with Frankston in the VFL as 23rd player. Will Sexton (Geelong Falcons), Ryan Hearn (Gippsland Power) and Mitch Cox (Dandenong Stingrays) have also been added to the squad.

Both squads will name a final 22 on Sunday.

Follow @TACCup or #NABAFLU18s on twitter Sunday for update scores from midday, or watch a live video stream of the game HERE

One player Vic Metro will need to watch in Round 3 is Josh Schache (Murray Bushrangers) - watch his Round 2 highlights below.