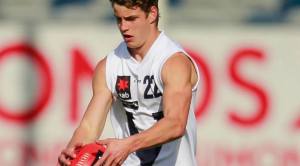 Vic Country has broken its hoodoo against South Australia to remain undefeated after Round 4 of the 2015 NAB AFL U18 Championship.

Overcoming an inaccurate start - Country kicked 1.6 in the first quarter, dominating the inside 50s - the visitors quickly found the target in the remaining three terms to run out winners 13.13 91 to SA 9.9 63 at AAMI Stadium.

Vic Country had lost its last nine encounters against the South Australians, but were finally able to walk away with a win for the first time since 2006.

In only his second Championship game of 2015, Geelong Falcon Darcy Parish showed flair in his 24 disposals, including seven inside 50s and seven marks. His teammate Rhys Mathieson excelled again with 23 disposals, highlighted by his clearance work, while Jarrod Berry amassed a team high eight rebounded 50s in his 19 disposal game, along with North Ballarat Rebels teammate Darcy Tucker. Murray's Will Brodie was among the best with 15 disposals and a team high seven tackles.

The game started slowly for Country with McKay kicking the only goal of the first term. The visitors could not convert from their forward 50 dominance kicking five behinds in a row to finish the term, trailing by one-point at quarter time.

The inaccuracy continued into the second, until Schache kicked his first to give Country the lead 12 minutes in. With Tucker providing strong run off half back, and Parish and Mathieson setting up the play out of the middle, Country traded the lead during the term but faced a seven-point deficit entering the main break.

A six-goal to two third term broke open the game, as Jacob Weitering started to influence the match from half back.

The visitors hit the lead at the 14 minute mark through Simpkin, as Country finished the third term strongly with four unanswered goals to lead by 24 points at the final change.

Vic Country had too many options up forward with Gippsland Powers Ben Ainsworth kicking two for the term, along with Schache, and the win was all but set up for Country

Schache kicked his fifth in the final quarter and Country were home, out to a match high 35-point lead.

Vic Country holds a two game and percentage lead over SA going into the final two rounds of the NAB AFL U18 Championships, facing SA at Simonds Stadium on June 26 before completing what is likely to be a title winning 2015 campaign against WA at the same venue on July 2.

Next weekend a number of TAC Cup players will kick off their Division Two NAB AFL U18 Championship campaign as they begin on Saturday June 20 at Southport on the Gold Coast: