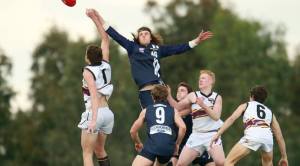 The North Ballarat Rebels moved two games clear on top of the TAC Cup ladder after seeing off the no.2 team in the league for the second consecutive week.

Having dismissed the challenge of the Murray Bushrangers in Round 10, the Rebels this week accounted for the Dandenong Stingrays by 23 points away from home at Shepley Oval.

The league leaders did it despite having two fewer scoring shots than the Stingrays and being severely beaten at the clearances, but North Ballarat’s pressure forced Dandenong into error and the Rebels capitalised with efficiency in front of goal.

The Geelong Falcons are the only team the Rebels have lost to in 2015, which was by two points at Simonds Stadium in Round 1.

On a high-powered weekend of TAC Cup football, Geelong and the Murray Bushrangers waged a 3 vs 4 battle that ended with Murray returning to second position on the ladder after recording a hard-fought nine-point win at RAMS Arena.

The Bushrangers trailed by three points at the last change, but kicked four goals to two in the final quarter to secure the victory. Murray’s Clayton Oliver starred with game highs of 27 disposals, eight clearances and 11 tackles.

Continuing the theme of the round, the fifth-placed Eastern Ranges met sixth-placed Oakleigh Chargers in another even match-up.

The Chargers prevailed by seven points, but not before suffering a huge scare in the last quarter as the Ranges flew home from a 29-point deficit at three-quarter time.

Thanks to some great work from Jack Roughsedge (26 disposals) and Daniel Houston (five goals), Oakleigh now shares a 6-4 record with Eastern.

In the weekend’s other matches:

-      The Gippsland Power solidified its position in the top eight with a 33-point defeat of the Bendigo Pioneers at RAMS Arena;

-      The Sandringham Dragons claimed a much-needed third win of the season by six points over the Calder Cannons at Trevor Barker Beach Oval; and

-      The Northern Knights’ second victory of 2015 by 20 points against the Western Jets at Preston City Oval kept the Jets grounded on the bottom of the ladder.

Watch highlights from Round 11 below: