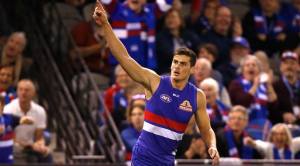 Former Eastern Ranges key forward and no.1 NAB AFL Draft pick Tom Boyd has scored a NAB Rising Star nomination following a strong performance for the Western Bulldogs in their 72-point win over the Brisbane Lions on Saturday night.

The 200cm 19-year-old had 12 disposals, booted four goals and took four contested marks against the Lions at Etihad Stadium in one of the most complete performances of his 20-game career.

Out of the Norwood Junior Football Club, Boyd was the TAC Cup’s leading goalkicker in 2012 as a 17-year-old with the Eastern Ranges, and represented Vic Metro in both 2012 and 2013.

The GWS Giants selected the dominant junior with the top pick in the 2013 Draft, where he played nine games and kicked eight goals before being traded to the Western Bulldogs in a high-profile swap with the club’s then-captain Ryan Griffen.