Mixed results in Round 5 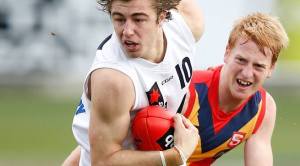 In doing so, Country has returned theU18 Championship title to Victoria, unable to be knocked off top spot with one round to play next week.

Rhys Mathieson (Geelong Falcons) led the clearances in the middle with another strong performance (18 disposals) while Gach Nyuon (Dandenong) had his best game of the Championships, shouldering the ruck duties but also proving effective around the ground (22 hitouts, 15 disposals)

After a strong first quarter – kicking the first four goals of the game – Vic Country were challenged by SA in the second term to hold just a one-point lead going into the second half.

But Josh Schache (five goals) and Ben Ainsworth (three) ensured a five goal to nil third term would help set up the win as the pair added two goals apiece. It gave the home team a commanding 30 point lead at the final break which was enough of a buffer in the final term to hold on for an 11-point win.

In the second game Vic Metro were unable to record back to back wins against WA, overrun in the final term to suffer an 18-point defeat.

After leading by 11 points at three quarter time, WA raced home with a five goal to nil final term to record their second win of the Championships.

The Championships conclude next week with Vic Metro facing SA at Etihad Stadium Wednesday and Vic Country aiming to complete a clean sweep of the Championships as they play WA at Simonds Stadium Thursday.